The handbook empowers facilitators to develop diversity in their work with groups in every field of non-formal education. We think, that diversity is becoming a more and more relevant topic- not only in youth education.

The book was published in English, Ukrainian, and Arabic language.

In our daily life and work, we all face the scarcity of these conditions. We work against structural discrimination and under-representation of marginalized groups. We foster those who have not yet developed the capacities to become involved. Many of these problems are strongly connected to habit and education – which means we have the ability to change them. A key term is here “diversity”, which is a positive approach towards plurality and equality according to a huge variety of characteristics, i.e. ethnicity, age, gender, religion, physical abilities, socio-economic background.

Humanity needs spaces that promote the freedom to develop and to disseminate. Facilitators, organisations and activists should be motivated to create such diversity friendly spaces for the people being involved in their operations.

Furthermore, they and our whole society might gain from such kind of includive thinking, allowing significantly more people to involve publicly with their creativity and expertise.

With this handbook we combined approved methodology from non-formal education and build a link between the individual, the group and the social level. A small Diversity ABC is explaining basic concepts related to the term. 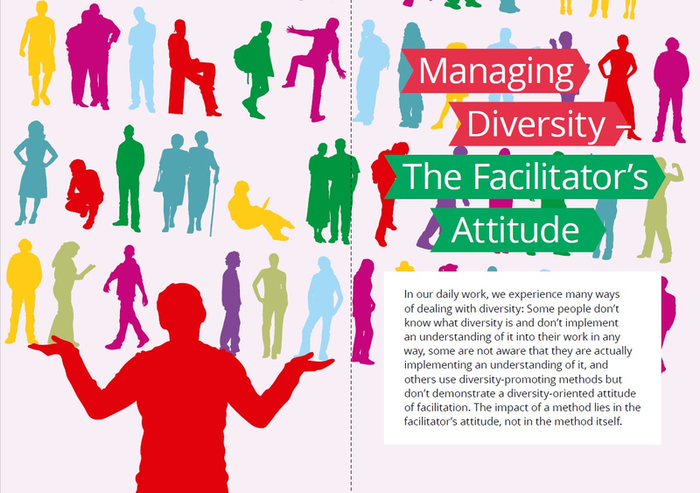 Conceptions of digital competence from the perspective of de...
Zwischen Utopie und Dystopie – Rezension
Handbook for Facilitators: Learning the Digital
A Healthy Digitalisation for Digital Wellbeing
For example, smartwatches or fitness trackers. Digitalisatio...
“We need rights-based learning about digitalisation...
Context Paper: Digitalisation and Democracy
Digitalisation and the Environment
Grundtvig Award 2021